Tinubu tells Buhari, I have the ambition to run as president. 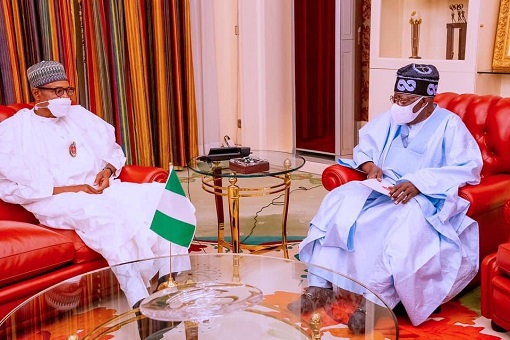 On Monday, the national leader of the All-Progressive Congress, APC, Asiwaju Bola Tinubu, said he was ready to contest for the presidential election coming up in 2023. According to him, he has informed President Muhammadu Buhari of his ambition. Will Buhari support Tinubu’s presidential ambition? He disclosed this at the Presidential Villa, Abuja, after a

On Monday, the national leader of the All-Progressive Congress, APC, Asiwaju Bola Tinubu, said he was ready to contest for the presidential election coming up in 2023. According to him, he has informed President Muhammadu Buhari of his ambition.

He disclosed this at the Presidential Villa, Abuja, after a private meeting with President Muhammadu Buhari on Monday. According to him, he his yet to disclose his ambition publicly as he was consulting different quarters.

Asking if President Muhammadu Buhari is officially aware of his ambition, he said, “I answer that with a categorical yes. I’ve informed the President of my intention, but I have not informed Nigerians yet. I’m still consulting. And I have no problem consulting. And I’ve not set a parameter of limitation to the extent of how many people I will consult.

You will soon hear; all you want to hear is the categorical declaration. You’ve got that truth from me that I have informed Mr. President of my ambition, and you don’t expect more answers than that.”

Asking him on the President responses, he said, “He is a democrat. He didn’t ask me to stop. He didn’t ask me not to attempt and pursue my ambition. It is a lifelong ambition. So, why do I expect him to say more than that? You are running a democratic dispensation, and you must adopt the principles and the values and virtues of democracy. That’s it,” he added.

Speaking about his potential race for the APC ticket with the Kogi State Governor, Yahaya Bello and Vice President Yemi Osinbajo; Tinubu said, “as former Governor of Lagos State, he possessed the capacity, confidence and vision to “rule” the country.

I don’t want to discuss individuals now. I must discuss myself. I have the confidence, the vision, the capacity to rule, build on the foundation of Mr. President, and turn Nigeria better. I have done that with commitment in Lagos State.

You’ve seen that experience and the capacity to turn things around, and that is what we are doing. You know, the confusion and drift of the past in the PDP (Peoples Democratic Party) are being corrected. And you can’t take away from that. As we are today, go back to the data on how many barrels of oil were we producing when we first came in and what it is today? Even at the time we came in, we did not pay the counterpart funds to start our rail line.

Today, you enjoy the comfort of having rail from Lagos to Ibadan. You have the Kaduna and the one for Kano State on the aggressive pipeline; you see excellent infrastructure. I just came from Azare, and I have seen good roads. The carnage of dying in vehicles is reducing except for the lack of compliance by many Nigerian drivers. Let us think back. Let us be intellectually inquisitive as to the past and the present and what the future holds for Nigeria,” he added.

However, dating back to Bola Tinubu’s, regime as the Governor of Lagos State, he tried his best to reform the state and he developed a lot of infrastructures in Lagos State. He might have a lot more for Nigerians if he becomes the President.

“Bola Tinubu was a protégé of Alliance for Democracy (AD) leaders Abraham Adesanya and Ayo Adebanjo. He went on to win the AD primaries for the Lagos State governorship elections in defeating Funsho Williams and Wahab Dosunmu, a former Minister of Works and Housing.

In January 1999, he stood for the position of Governor of Lagos State on the AD ticket and was elected governor. When he assumed office in May 1999, Tinubu promised 10,000 housing units for the poor with little achieved. During the eight-year period of his being in office, he made large investments in education in the state and also reduced the number of schools in the state by returning many schools to the already settled former owners.

He also initiated new road construction, required to meet the needs of the fast-growing population of the state. Tinubu, alongside a new deputy governor, Femi Pedro, won re-election into office as governor in April 2003. All other states in the South West fell to the People’s Democratic Party in those elections.

He was involved in a struggle with the Olusegun Obasanjo-controlled federal government over whether Lagos State had the right to create new Local Council Development Areas (LCDAs) to meet the needs of its large population. The controversy led to the federal government seizing funds meant for local councils in the state. During the latter part of his term in office, he was engaged in continuous clashes with PDP powers such as Adeseye Ogunlewe, a former Lagos State senator who had become minister of works, and Bode George, the southwest chairman of the PDP.

Relations between Tinubu and deputy governor Femi Pedro became increasingly tense after Pedro declared his intention to run for the gubernatorial elections. Pedro competed to become the AC candidate for governor in the 2007 elections, but withdrew his name on the eve of the party nomination.

He defected to the Labour Party while still keeping his position as deputy governor. Tinubu’s tenure as Lagos State Governor ended on 29 May 2007, when his successor Babatunde Fashola of the Action Congress took office”. This section is culled from WIKIPEDIA.