What If There Were No Whites In South Africa? An extract from Ferial Haffajee’s book 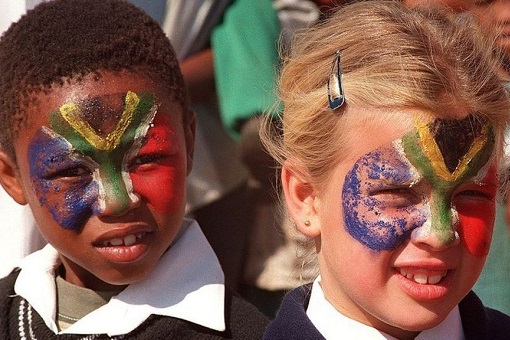 In her first book, Ferial Haffajee asks a loaded question, but one that reveals a nuanced array of responses and further questions. As the white population in SA decreases, why does white supremacy still loom so large in black lives? Are we unwilling or unable to see meaningful transformation despite documentary proof of change in

In her first book, Ferial Haffajee asks a loaded question, but one that reveals a nuanced array of responses and further questions. As the white population in SA decreases, why does white supremacy still loom so large in black lives? Are we unwilling or unable to see meaningful transformation despite documentary proof of change in our country? Here is an edited extract:

What If There Were No Whites In South Africa? by Ferial Haffajee

I arrive at the Financial Mail in 1999. It is an august and elegant newsroom and I am very excited to be there. I get an office with my name on the door. The FM allows me autonomy and space and I get invitations to lunch. For a girl from Bosmont who grew up on chip rolls on pavements as lunch, I love it.

And I hate it. The FM is also stuffily traditional and deeply unreconstructed.

The FM, as it is at the time, is rich and sure of its place in the world. Its pages are the authoritative guide to corporate South Africa. And the picture is odd. It is as if political power has changed but not corporate power, and neither has the magazine caught up with what change means.

Although this is 1999, all the columnists are white and most of them are white men. There is a Tuesday conference where, I observe for months, nobody says anything about what increasingly feels like a media injustice to me. So, one day, I pipe up: ‘When will we have some black columnists? I count seven written by white men. One by a white woman.’

You can hear the pin drop. The shift of discomfort is palpable.

My heart’s beating as hearts do when they confront uncomfortable hegemonies anywhere. The progressives mutter about not being able to find any. The conservatives glower.

Being a practical Haffajee girl, I decide to do something about my angst. A colleague, William Mervin Gumede, and I publish the first Little Black Book to bridge the chasm between the worlds and ensure my colleagues can’t say they can’t find any black columnists.

And so, through the next years, we publish the Little Black Book. It covers all major sectors and includes the public and nonprofit sector. Every year it gets fatter and fatter. Advertising in it is good. Margins are excellent. The columns in the FM change.

Barney Mthombothi hones the style that will make him South Africa’s most symphonic columnist. Over the next 17 years, it becomes part of my practice to track people for whom the new South Africa is a Mecca.

The Women’s Book follows, then the 200 Young South Africans You Must Take to Lunch, then, at City Press, the 100 World Class South Africans. These compendiums are filled to the brim with people for whom freedom is a tangible good.

The years of burrowing through reams of research reveal a depth of talent and transformation. There isn’t a sector where black aspiration and talent don’t meet in wonderful harmony to reshape how we understand ourselves. From the arts to mining; from financial services to fashion; from universities to the Union Buildings, I found real black and female leadership.

At the Mail & Guardian, the publication of a new generation of young people we think are influential is the proudest work I’ve ever edited, for it is a genuine showcase of a full range of young South Africans who have grasped freedom by the wings and flown with it.

So why do we find ourselves here? When I preach my gospel of change, of black accomplishment and of the good and healthy fruits of freedom, it is as if I am the anti-Christ. It is as if I have journeyed to a place where nothing has changed, where an oppressive minority controls thought and destiny. A place where black people labour under a system of white supremacy.

Do I live in a different world? Am I crazy? As I research, I see our debates, our racialised world view is built in a world where the black and white middle class play bumper cars. It is a rivalry for how history is understood and weighted. It is a rivalry about whose culture will rule the roost.

It wasn’t supposed to be this way.

I know things have changed, but as I stand and survey in 2015, I see they haven’t changed sufficiently after two decades. And the pattern in workplaces is the same. It is the cappuccino – mixed to a good brown at the bottom, a layer of thick white froth and sprinkles of chocolate. The impetus for change I tracked at the start of the century has slowed. I speak to boardrooms fairly often. And, yes, if they are not in sectors with high regulation (mining, telecoms) or owned and part-owned by the state, the grooves worn by our past have not changed sufficiently.

By the end of 2013, about one in five top managers was black; for senior managers, it was one in four. In both categories, even if you group black, coloured and Indian people together, there are far more white people (the majority of whom are men) running corporate South Africa.

This is huge, for it means that in the entire world of work outside of the state sector, the patterns of old remain intact. The leaders and the led have not changed substantially enough to resculpt how either of these two positions in society and in work is understood.

Good societies have healthy mixes in both parts of this equation. In a diverse country like ours, the proportions have to be inverted to alter workplace culture and instil black leadership as the norm rather than the exception.

For the purposes of research, I turn my white privilege antenna back on. I realise that somewhere along the way, I have grown oblivious to its irritations. ‘White privilege’ refers to a set of behaviours that underlie conduct that inflames South Africa’s sometimes awful race relations – it is often unconscious, the mark of a former ruling class. Having turned it on, I can’t wait to turn it back off.

Zelda La Grange’s set of exasperated tweets in January 2015 do deep damage because she is regarded as a figure of national solidarity with black struggles. Yet her tweet bomb reveals her loyalties to be split between here and France – she is of French Huguenot stock and in one of her tweets she plans to ask French leader François Hollande for citizenship. In another, she suggests that Oom Jan (van Riebeeck) should not have set foot here.

But white privilege can also be seen at the annual office party and what is planned for it. Which culture is dominant?

White privilege screams its anger in a sustained narrative against employment equity and black empowerment – as if it does not realise that anything but an economy owned in proportion to the demographics of South Africa is anti-democratic.

Of course, you will find black nonexecutive directors and senior managers in the boardrooms, but the proportions are inverted here – blacks a minority and whites a majority. While we don’t change workplaces, the corrosive debates about race in South Africa will get worse.

It is in workplaces where racial bumper cars play out and crash into wider society, bringing all their pains with them. It is here that impatient black aspiration meets dogged white self-protection, where our pain lies and where leadership does not lie.

Levels of socialisation, and the development of stronger relationships across race lines, are consistently lower in successive survey rounds. In 2012, 17.8% of South Africans always or often socialise with people of other races, for example, in their homes, or in the homes of friends. A further 21.6% do so sometimes, and more than half (56.6%) rarely or never socialise across race lines.

Whites and Indian/Asian youth are more likely to indicate a strong association with others of the same race or economic class than adults and, across the board, socialisation across race is much more common among younger people than older ones.

The place of greatest racial interaction is the workplace, the university or social media, where the middle classes meet and where we decide what we will be. It is here where nonracialism has come to die. If we let it.