Why was Shireen Abu Akleh killed? 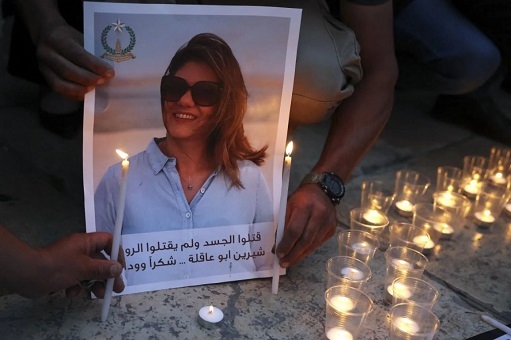 Al Jazeera journalist, Shireen Abu Akleh was allegedly shot dead by Israeli forces in occupied West Bank city of Jenin in the early morning of May 11, 2022. There have been several denials by the Israeli authority regarding the culpability of their military. But, as more evidence come to the fore, all pointers seems to

Al Jazeera journalist, Shireen Abu Akleh was allegedly shot dead by Israeli forces in occupied West Bank city of Jenin in the early morning of May 11, 2022. There have been several denials by the Israeli authority regarding the culpability of their military. But, as more evidence come to the fore, all pointers seems to support the claim that the Israeli military deliberately killed Shireen Abu Akleh. The question to ask then is … why? Why would one of the top militaries in the world be scared of a journalist?

Shireen Abu Akleh was a Palestinian-American journalist who worked as a reporter for the Arabic-language channel Al Jazeera. She was born in Jerusalem on April 3, 1971. She spent time in the United States, obtaining U.S citizenship through a member of her mother’s family who lived in New Jersey. She attended secondary school in Belt Hanian. She graduated from Yarmouk University in Jordan with a bachelor’s degree in print journalism.

Before her unfortunate death, she lived and worked in East Jerusalem, reporting on major events related to Palestine, including the Second Intifada. Shireen Abu Akleh also covered Israeli politics and reported on funerals for Palestinians killed by Israeli forces. She reported the Battle of Jenin in 2002 and other Israeli operations in the Gaza Strip. In 2005, she became the first Arab journalist allowed inside the Shikma Prison to interview long-term Palestinian prisoners.

The 51-year-old Palestinian-American was killed by a bullet to the head on May 11, 2022 at around 6:30 a.m. She was standing with other journalists near the entrance of the Jenin refugee camp. They had come to cover an Israeli raid. Video footage and audio analysis, shows she was shot from the distance of about 200 meters.

Since her death, the Israeli forces have denied culpability. Israel insist she could have been killed by an indiscriminate gun-fire from the Palestinians militants, or an Israeli soldier returning fire, during a raid at the Jenin camp. However, eyewitnesses say there were no armed Palestinians or fighting in her domain. It is even more disturbing that more than six weeks after the unfortunate incidence, Israeli authorities have not conducted a criminal investigation.

Recent forensic investigation in the United State was finalized and announced by the US State Department spokesman Ned Price who claimed that the bullet was badly damaged, which prevented a clear conclusion on who killed her.

INCIDENCES OF JOURNALISTS KILLED DURING CONFLICTS.

It is very unfortunate that the killing of journalists during conflicts appears to be an endless circle. It seems the end to this sad episode is not in sight. Over the years, many reporters and correspondent covering events as they unfold in conflict zones in different parts of the world have paid the ultimate price of death in the line of duty. These unfortunate incidences are not exclusive to one part of the world or a particular conflict. It is not only widespread, but also recurring. The Asia Pacific region comes first with 681 killed journalists, followed by Latin America with 571, the Middle East with 558, Africa with 466 and Europe with 373.

At least 15 journalists and media workers have been killed in the line of duty since the Russo-Ukrainian War began in 2014 — seven in the war in the Donbas in 2014-2015, eight still since the full-scale Russian invasion of Ukraine in 2022. Six have been Russian, four Ukrainian, one Italian, one American, one Lithuanian, one Irish and one French.

In Africa, the story remains the same as journalists in the line of duty are losing their lives on a continuous basis. For instance, about 59 radio, print and television reporters operating in Somalia died in the period from the start of the civil war in 1992 to 2013.

WHY WOULD THE ISRAELI WANT TO KILL SHIREEN ABU AKLEH?

Another factor that must have led to the killing of Shireen Abu Ablek is the coverage of the age-long Palestinian-Israeli conflict. The way the Doha-based Media Organisation is disseminating information about this conflict do not go down well with the Israelis. Given Al Jazeera is at the front and centre of every developing story in the region, and immediately beaming this to the rest of the world, it thus makes it almost impossible for the Israeli Information Machinery to distort the truth about the conflict through propaganda or any other manipulative apparatus.

The Israeli it seems want to use the death of Shireen Abu Ablek to send a note of warning to other journalists from covering and reporting its perceived atrocities. It means journalists covering the activities of the Israeli forces in the conflict are doing so at the risk of their lives. This unfortunately could affect the established channels of information in the region.

WHAT CAN BE DONE TO PROTECT JOURNALISTS?

There should be a conceited effort by international bodies and humanitarian agencies to put paid to the spate of killings of journalists serving in conflict’s zones in different part of the world. They should intensify the pressure on political leaders’ military forces and the concerned parties to stop this deliberate and heinous act.

Furthermore, world leaders should make more laws and strengthens the existing ones designed to protect journalists and other media workers reporting in war zones. There should be synergy by the different national governments and international organisations in the efforts and campaign against the killing of journalists in the line of duty in conflict zones and elsewhere.

In conclusion, journalists and other media workers should be able to discharge their duty without fear or favour. The killing of journalists is highly despicable. Business as usual is no longer acceptable. The lives and safety of members of the fourth estate of the realm is not only imperative but it is also sacrosanct. Therefore, we must all do our best to stem the tide of the killing of journalists in the line of duty.