And the Migration to Europe through Libra continues unabated. 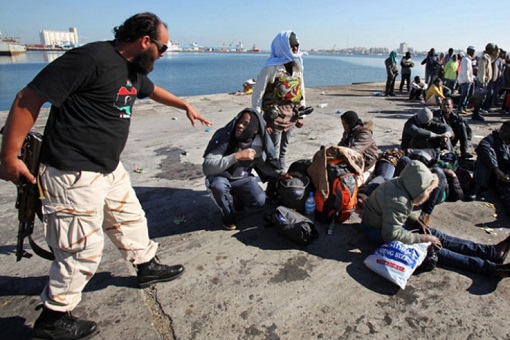 When Greece began its deportations of refugees to Turkey on April 4 under a deal between the EU and Ankara, Europe’s semi-panicked leaders began to think the worst of the migration crisis was over. But another problem was quietly re-emerging: In the first three months of 2016, 18,795 refugees attempted to make the journey across

When Greece began its deportations of refugees to Turkey on April 4 under a deal between the EU and Ankara, Europe’s semi-panicked leaders began to think the worst of the migration crisis was over.

But another problem was quietly re-emerging: In the first three months of 2016, 18,795 refugees attempted to make the journey across the Mediterranean from Libya to Italy, an 85 percent increase from the same period the year before, according to the U.N.’s refugee agency.

“It’s quite difficult at the moment to analyze why this is happening,” says Federico Fossi, a spokesman in the agency’s office in Italy. He suggests that unusually mild weather in Libya might have encouraged smugglers to send boats out. Others have posited that with the EU focused on migration to Greece, refugees decided that now is a good time to try to reach Italy.

EU officials are beginning to worry that the Libya-to-Italy crossing is once again becoming the preferred path to Europe for refugees and migrants. The main cause for concern: The journey is exceptionally dangerous. The route claims the lives of one in every 92 asylum seekers who try to cross, according to data from the International Organization for Migration (IOM) . And there are other hazards. Before refugees set sail, many will have fallen victim to smugglers who routinely rape, torture, kidnap or enslave their clients. Despite the risks, refugees in Libya—almost all from African countries—seem to be increasingly determined to reach Europe.

“We are worried about the consequences of the EU-Turkey agreement,” says Fiorella Rathaus, director of the Italian Council for Refugees . “If it will not be possible to reach Europe through Greece, it is highly probable that refugees stuck in Turkey, Jordan or Lebanon will try to reach Europe through North Africa. Libya at the moment is a very dangerous place for refugees, and the Sicilian channel is a deadly route.”

In 2014, more Syrian refugees crossed from Libya to Italy than any other nationality. Libya then was far more politically stable than it is now. And although the crossing was long, Italy remained a preferred destination over Greece because refugees arriving in Greece must pass through the Balkans to get to Germany, which is the preferred destination of many asylum seekers. In 2014, Turkey was also difficult to access from Syria because Kurdish unrest led the government to sporadically close the border.

By 2015, however, just 7,448 Syrians used the central Mediterranean route while 478,898 Syrians went from Turkey to Greece, according to the IOM. Egypt, Tunisia and Algeria had all begun imposing visa requirements, making Libya—which had been destabilized by rival factions—difficult to reach.
A year later, and the situation has changed again. In March, Macedonia, Croatia and Slovenia closed their borders, sealing off the western Balkans route. On April 4, Greece began deporting refugees whose asylum appeals were unsuccessful. If the eastern route was effectively blocked, refugee groups wondered, where else would asylum seekers who did not want to stay in Turkey go?

Some in Europe saw the problem coming. In a letter to EU officials on March 12, Federica Mogherini, the high representative of the EU for foreign affairs and security policy, wrote that the EU was planning to send a mission to Libya to boost its police, security and counterterrorism forces. U.K. Prime Minister David Cameron announced on March 17 that he would extend the deployment of the warship HMS Enterprise on anti-trafficking operations off the coast of Libya until at least the summer. The EU has also continued Operation Sophia, a military mission that began in October 2015 and has so far caught 58 suspected people smugglers and handed them over to Italian authorities. According to the EU Commission, the naval forces, made up of vessels from EU member states, have destroyed 98 of the traffickers’ boats and saved 11,509 lives.

The EU, however, is restricted in its efforts to reduce migration from Libya because it does not have permission to enter Libyan waters, which extend 69 miles past the country’s coast. That means smugglers and traffickers can take boats full of refugees to the edge of Libyan waters, abandon the boats and then turn back to the Libyan coast without fear of being arrested.

A Libyan man who sometimes uses his boat to help rescue struggling refugees says security forces are doing little to combat the people traffickers, many of whom are affiliated with one of the many militias struggling for power in the country. “The smugglers are known by the local community in some cases, but the communities don’t have a strong enough police force to combat them,” says the man, who asked for anonymity because he did not want his employers to know he was talking to a journalist. “What’s a police officer compared to an AK-47?”

There is some hope, however, that the political situation in Libya is improving. On April 4, the country’s self-declared Islamist government stepped aside to allow a U.N.-backed one to take control. The Libyan Samaritan describes the mood in Tripoli as “cautiously optimistic,” but he adds, “Whether the refugee crisis takes top priority will be up to the EU and international community, who need to put pressure on the [Libyan] government.” Refugee organizations say the government needs to improve its sea patrols, crack down on people smugglers and grant the EU access to Libyan waters.
The EU may need to start applying that pressure soon. The weather in the southern Mediterranean is improving daily