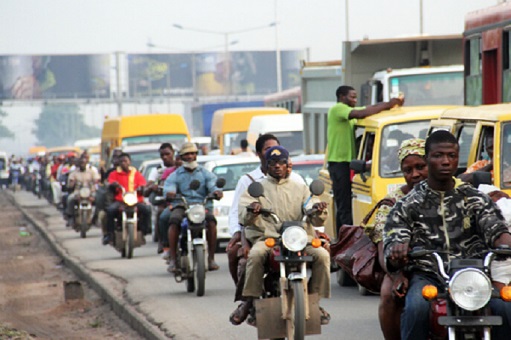 The fear of Okada riders is the beginning of wisdom for many Lagosian. Their fear is not far-fetched, as many residents of Lagos are daily bedeviled with the inglorious activities of many of the Okada riders plying their trade in the state. These Okada riders have become a menace to the society. THE PREVIOUS BAN

The fear of Okada riders is the beginning of wisdom for many Lagosian. Their fear is not far-fetched, as many residents of Lagos are daily bedeviled with the inglorious activities of many of the Okada riders plying their trade in the state. These Okada riders have become a menace to the society.

The Governor of Lagos State, Mr.Babajide Sanwo-Olu recently gave a directive banning the operation of commercial motorcycle operators, popularly known as Okada riders in six Local Government Areas. The local government areas affected by the ban are Ikeja, Surulere, Eti Osa, Lagos Mainland, Lagos Island and Apapa. However, this is not the first time such ban will be issued in the state. Successive administration in the state had several times announced such ban on this mode of transportation with any success.

In 2012, the then governor, Babatunde Fashola announced a total ban on the operations of commercial motorcycles in the Ikeja axis of the state. Also, in 2017, the administration of Akinwunmi Ambode announced a ban on Okada riders on major highways, bridges and roads. In January 2020, Governor Babajide Sanwo-Olu banned the operations of motorcyclists and tricycle riders in six local government areas, nine local council development areas and ten major highways in the state with effect from February 1, 2020. They were also banned from plying forty bridges and flyovers across the state.

According to the Lagos State Governor, this present ban will be enforced in different phases to allow Okada riders in other places where their activities are yet to be banned find something else to do within a short period of time. He also added that the recent move is in line with the Lagos State Transport Sector Reform Law of 2018.

It is obvious from the look of things that none of the previous ban on Okada riders by the successive Lagos state governments has produced the desired results. It is just a matter of time before the Okada riders gets back to the roads, highways and bridges. They simply wait for a while or change their modus-operandi before continuing their nefarious enterprise.

THE MENACE OF THESE OKADA RIDERS IN LAGOS STATE.

Lagos State is groaning under the nauseating activities of Okada riders as many of them have become a menace to the society. It is no longer news that many Okada riders are criminals in disguise who perpetrate different kinds of criminalities in the state.  They use these Okadas to commit various crimes in different parts of the state. In the past, many of them have been caught with pistols with which they carry out their nefarious acts. Most traffic robbery, carjacking, movement of arms and cash-snatching from bank customers had been traced to criminals who operate on Okada

Also, the unprecedented rise in the number of Okada riders on Lagos roads, highways and bridges has led to an increase occurrence of accidents and avoidable loss of lives. To buttress this is the fact that many of the patients receiving treatment at the National Orthopedic Hospital, Igbobi and other hospitals are victims of the recklessness of Okada riders.

The free-flow of traffic and commuting on major highways in the metropolis is most times hampered by the lawlessness and nauseating activities of the Okada riders. They will not obey traffic law or comply with the stipulated highway codes. They violate traffic law with reckless abandon.  Their activities have led to a complete breakdown of law and order. They also have the record of been violent especially whenever the police and other security agencies want to enforce the laws relating to their activities. Most times, they operate like a mob and are ever-ready to engage in a fight to support one of their own.

Recently, some Okada riders lynched a sound engineer identified as David Imoh in the Lekki area of the state. These Okada riders also display gross disregard for the rule of law. They ride against traffic and avoid the use of number plates.

WHY IS THERE AN UNPRECEDENTED INCREASE IN THE NUMBER OF OKADA RIDERS IN LAGOS?

In recent times, Lagos State has witnessed the influx of Okada riders who are mostly foreign nationals from neighboring countries like Niger, Chad, Benin, Togo and Mali and from the Northern part of the country. Like most of their counterparts from Northern Nigerian, most of these foreign Okada riders are of the Fulani ethnic stock. This makes it difficult for immigration officials and other security agents to easily identify them as foreigners. Also, the porous land borders make it easy for them to come to the state and mix-up with the locals.

This sudden increase of Okada riders of Northern extraction in Lagos and other part of the south has a political undertone. It is intentionally motivated and promoted by the Northern political establishment to facilitate relatively easy victory in future presidential elections. This is in view of the constitutional requirement of securing at least 25% of the votes in two-thirds of Nigeria’s 36 states. The deliberate act of populating the South with Northerners will perpetuate the overall long-term objectives of the Northern pollical elites.

It has also been alleged that there is a grand plan to exports terrorism from the North to the South. This will level things up in the issue of security challenges in the entire country. If this happens, the South will equally have a taste of the Boko Haram insurgency in the North East, banditry in the North West and North Central geo-political zones of the country.

Rumour mill has it that the North is seeking an expansionist policy through a modern day Jihad. It seeks to conquer the entire South and force on it Islamic religion and ideology. This is intended to be a replica of how Uthman Dan Fodio defeated the Hausa Kingdoms in 1804 during the Fulani jihads.

In addition, the nationwide #EndSARS protest and the crises that accompanied it  — October 2020 — encouraged Okada riders to return to the roads, highways and bridges where they they had been previously banned. The withdrawal of the police which led the enforcement of the ban of Okada riders led to the influx of commercial motorcycle riders from the Northern parts of the country.

HOW THE LAGOS STATE GOVERNMENT CAN CHECK THE DELUGE OF NORTHERN EXTRACTS INTO THE STATE.

The Lagos State government can check the influx of Northern extract into the state through the following means.  First, it needs to join hands with the security forces in order to achieve any meaningful result. Second, it needs to have a good working relationship with other Southern states, especially Oyo state and Ogun state. Also, the police must intensify the crack down on the operation of the Okada riders in different part of the state.

Also, the police and the other law enforcement agencies assigned with the enforcement of the ban must continue to intensify the crackdown. They must not rest on their oars. They must pursue the enforcement to the logical conclusion. That is to see that the Okada riders are completely off the roads, bridges and highways in all nooks and crannies of the state.

It is better to learn from a tragic history than to learn from a bitter experience. The time for the government to act is now before it is too late. “A stich in time saves nine”.

“No nation state or sub national leaves its security to chance. Yoruba elders should look at the bigger picture, we are being surrounded by marauders from the North. The time to act is now, before another Afonja’s Ilorin takes hold”.